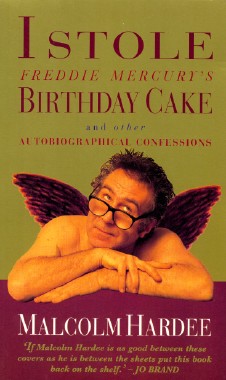 There are Three Golden Rules of Comedy:

Don't laugh. Well, do laugh, because that's what people do when Malcolm Hardee gets his knob out. Which he does. A lot. Mainly in London, annually in Edinburgh, and occasionally for the edification and delight of other nations. He's a comedian, what we might call the godfather of alternative (which he would hate), and a very very funny man.

I Stole Freddie Mercury's Birthday Cake is 229 marvellously entertaining pages of anecdote, story and, very likely, out-right lying. It's nominally an autobiography, but more a coathanger for a suit of fabulous jokes. Learn how Greta Garbo once walked over him. How he lived next door to Val Doonican. How he sat his 'O' levels in stripy pyjamas. Shopped his mother for shop-lifting. Stole. Stole. And stole again.

Hardee was a bad boy, nicking anything not nailed down, driving cars all over - very rarely his own - and in and out of borstal and prison. The way he tells it, it was just something you did: went to school, met girls, went to gaol.

Then he grew up - "Prison is like mime or juggling: a tragic waste of time" - and saw the light of comedy, clubs and sometime agenting for special friends. Thus we learn of his deep affection for the deeply strange Charlie Chuck (Reeves and Mortimer's Uncle Peter). And his admiration for legendary comic-magician Gerry ("Nelson Mandela. What a cunt") Sadowitz. He writes at length about the genius of a man he likes but doesn't understand. It's the book at its most restrained and considered.

The rest is stand-up. See how Hardee ran for Parliament. Learn how to make your fortune by sticking a banger up your arse. Discover how he goaded US performance artist Eric Bogosian into beating-up a tractor. See Hardee play harmonica with the Bonzo Dog Doo Dah Band. Glean all you need to know to run a successful London comedy club - booking jugglers and forgetting the low roof, or omitting to tell a tap-dancer about the carpeted stage. And, what you came along for in the first place, how he and his reprobate naked balloon-dancing pals swiped a birthdaying Freddie Mercury's Ł4,000 cake.

Slander, libel, lies, probably, and deliriously funny. Hardee was a bad lad but never malicious. There's a streak in him that just has to push too far (witness his second attempt at Bogosian) but you have to say that he's loyal. The philosophy? "I'm happy where I am in South East London. I'm respectable now. I have trousers, a house and a wife."